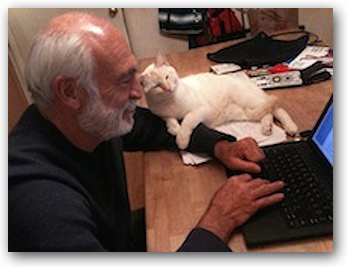 
A native of Berkeley, California, Michael Cooper emigrated to Israel after finishing high school and lived in Jerusalem in 1966, the last year the city was divided between Israel and Jordan. Over the next decade, he travelled throughout the region, worked fitfully as an actor and musician on stage and Israel TV, studied at Hebrew University in Jerusalem, and graduated from Tel Aviv University Medical School. Now a pediatric cardiologist in Northern California, he returns to Israel and the West Bank about twice a year to volunteer his services to children who lack adequate access to care. When not traveling, he lives in the East Bay with his wife, two cats and one dog. Three adult children occasionally drop by.

In mid-life, Cooper turned from writing medical journal peer-review articles to historical fiction, (though some suggest that he always wrote fiction. But they would be wrong). His debut novel, Foxes in the Vineyard, set in 1948 Jerusalem, won the grand prize in the 2011 Indie Publishing Contest. His second novel, The Rabbi’s Knight, set in the Holy Land at the twilight of the Crusades in 1290, was finalist for the Chaucer Award for historical fiction. A soon-to-be-completed third novel, Sins of the Fathers, is set in Europe and the Middle East during WWI. All three novels stand-alone, though they’re connected by the common threads of Jerusalem’s Temple Mount, the St. Clair/Sinclair bloodline and the subversive notions of coexistence and peace.